At the end of the second day we reached Dharchula

Route map from to Kailash Manas Sarovar is shown below. 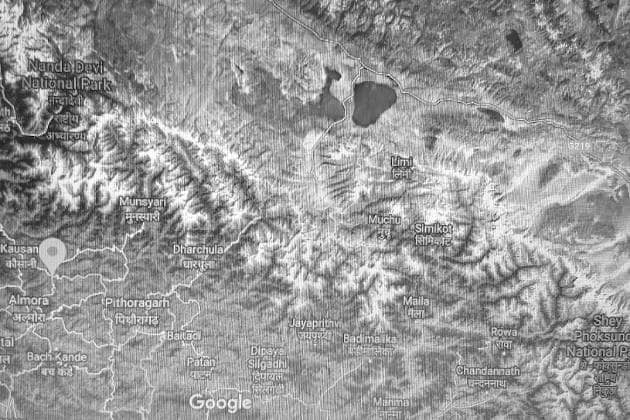 Following is the map from Kausani to Bageswar. 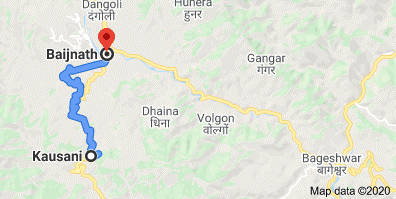 Our first destination on the second day was Baijnath, about 16 kilometres from Kaushani.

Baijnath is a 12th century temple complex constructed in stone. It consists of 18 temples built by Katyuri kings. The name Baijnath is derived from the name Vaidyanatha Shiva, the Lord of Physicians. 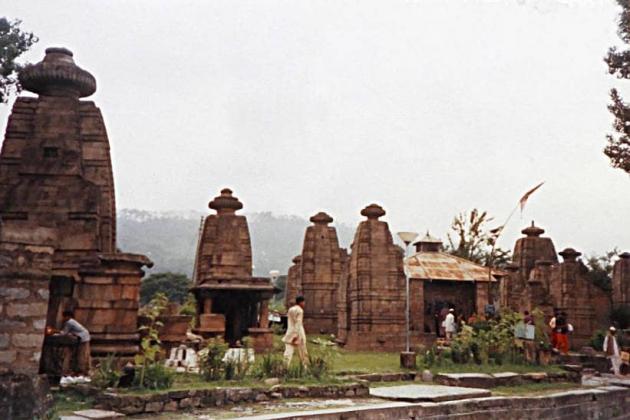 Around 7.30 A.M., we reached Baijnath. The town of Baijnath draws its name from the temple. The temple complex is situated on the bank of Gomti river.

There are idols dedicated to Lord Shiva, Ganesh, Parvati, Chandika, Kuber, Surya and Brahma in this temple complex.

The main temple is dedicated to Goddess Parvati and is accessible from the riverside by a flight of steps made of stones.

The temple complex had a beautiful garden. We took a stroll inside this garden. 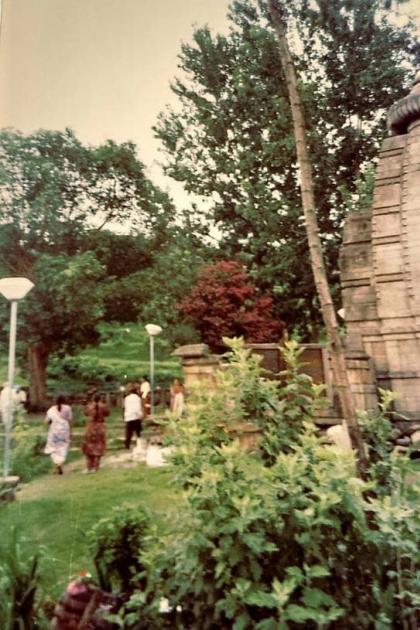 The temple is popular with locals and tourists alike and attracts great crowds on special days like Mahasivaratri.

Our next stop was at 10.00 A.M at Bageshwar, at a distance of 20 Kilometres from Baijnath. We visited the ancient shrine dedicated to Lord Shiva, who incarnated himself as a tiger (Bagh) and is called Baghnath Temple. Baghnath temple is located near the confluence of Saryu and Gomti rivers. Baghnath Temple featured impressive carvings and was festooned with bells of all sizes.

The pilgrims tried their little fingers to lift a rock inside the temple complex. The rock can be lifted only when seven men try with their fingers. Could not verify the phenomenon as women were not allowed to try.

Later, we went to see the confluence of Saryu and Gomti.

Sh. Rawal took us to the particular point of the confluence where one should take a holy dip. 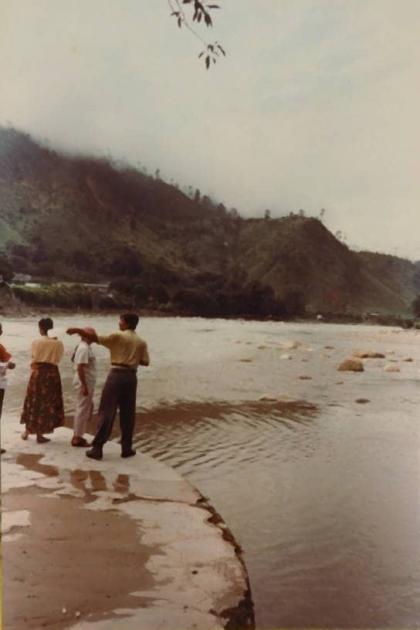 Mr Rawal alone went into the river and took the holy dip in the confluence. Rest of us enjoyed watching the confluence surrounded by green mountains. 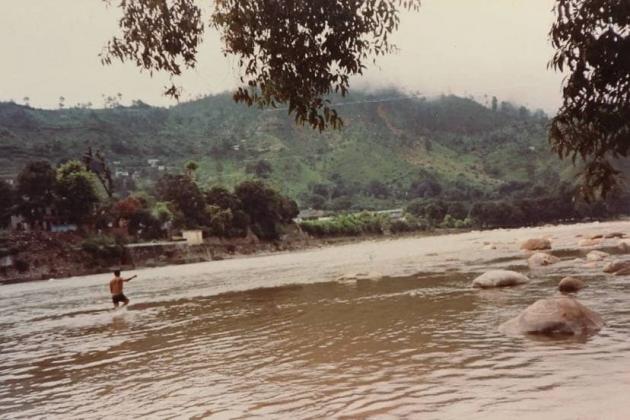 Bageshwar to Chaukori was a 50 km journey.

We stopped for our lunch at Chaukori, which is a hill station set among the lofty peaks of the Western Himalayan Range in the Kumaon Division of Uttarakhand and a prominent tourist place. From here one can have a wide and picturesque view of Himalayan range. Tourists coming to this place generally also visit the nearby tourist places like Patal Bhuvaneshwar, Bageshwar and Almora.

The KMVN rest house at Chaukori was well maintained. 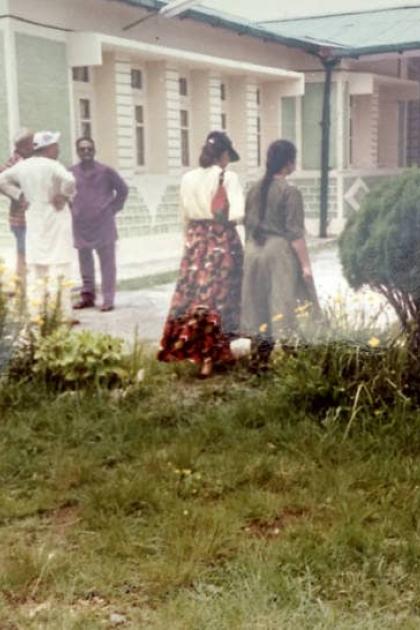 After lunch, we strolled around the Rest house to see the Panchachulli peak. Unfortunately, it was cloudy and the peak did not oblige us. We came back thinking that we must make another visit to witness its grandeur.

Dharchula, Final destination for the day: 109 km from Chaukori

Evening tea was served at Thal. After that we passed the confluence of Swet Ganga and KaliGanga at Jauljibi on our way to Dharchula.

We finally reached Dharchula around 5.15 P.M. Dharchula is situated at the bank of Kali River. It gets its name from ‘Darchyo’ and ‘la’; “Darchyo” is a white colored traditional holy flag and “la” is an honorific term. Later the word changed with time as Dharchula in India and Darchula in Nepal.

The camp site was not impressive at all. We were told that Nepal is separated from India by the Kali River at Dharchula. We went to see the Kali river bridge connecting India and Nepal. 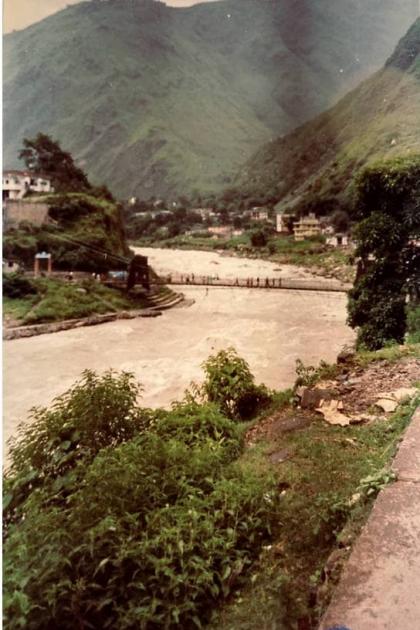 Once we came back to the camp site, all hectic activities started. The young medical officer, Dr Jagdish Chandra Mandal and two wireless officers introduced themselves stating that they will be with us till Gunji. The ponywala Kalyan Singh also arrived with his mule “Chandu” and informed me that they would be with me till Lipulekh.

There was power failure. Using our torch and candles, we packed our belongings inside water proof bags so as to make them ready for weighing. We were allowed to take maximum 20 Kg of baggage. Watching the weighing process was fun. I could not resist myself from sitting on that luggage weighing platform to weigh myself. 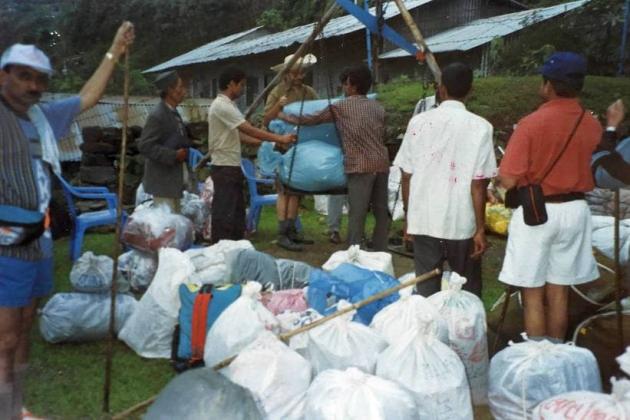