The whole day of 23rd July was washed away by rains and trekking throughout the day 8, we reached Gunji walking through the picturesque Chhiyalekh pass and the old business town of Garbiyang.

Satellite map showing the location map of Gunji is given below: 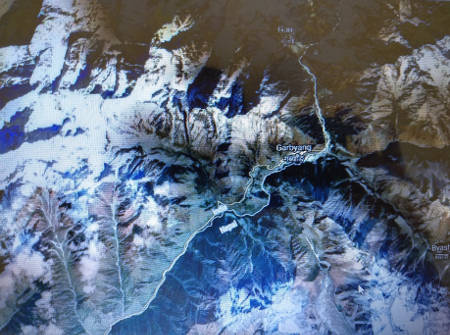 The route map that we followed from Budhi to Garbyang on day 8 is given below: 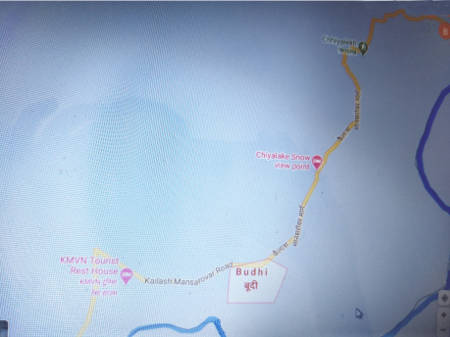 Route map from Garbyang to Gunji is shown as under: 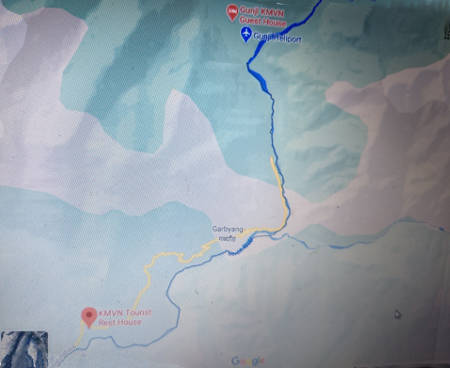 It rained heavily at Budhi during 23rd night. Early next morning, Ganesh and another BSF person went to inspect the condition of the uphill path we were to take that day.

After they came back, we started for Gunji. There was a steep climb after leaving Budhi. The uphill mule track was narrow, slushy, muddy and slippery. I managed to cover part of it by riding on Chandu. The uphill climb ended in a plateau – the beautiful misty, green Chhiyalekh pass.

The plateau had black boulders scattered interspersed with shrubs and bushes having variety of flowers in various sizes and colours spread for about half a kilometre. I could recognize only the bushes of wild roses. Others identified them as iris, primula and gentian. 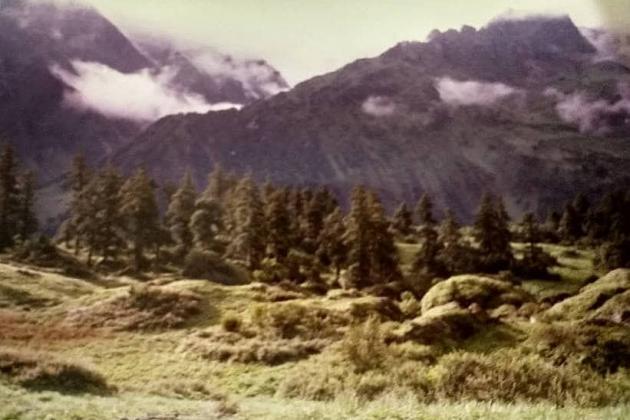 Kalyan Singh told me that on our way back the place would transform to a real valley of flowers. 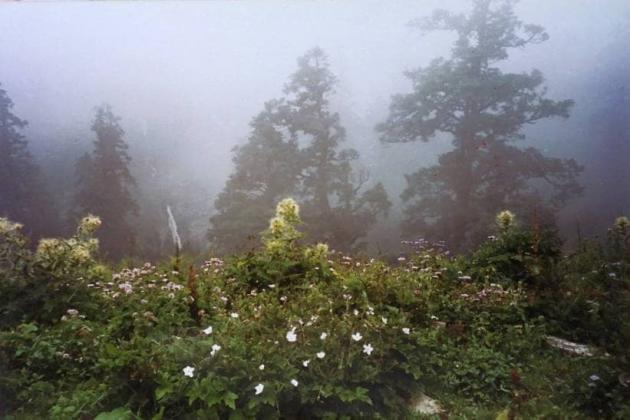 At a distance, we could see birch trees and fir trees. Down below, Kali River was flowing like a silver line. 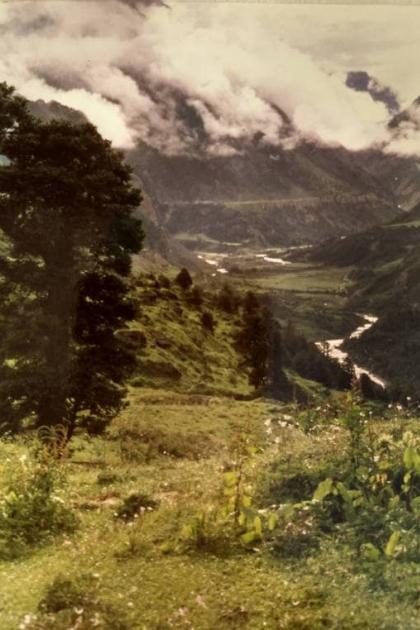 My toes were swollen with pus accumulation and were hurting inside my shoes. I started walking barefoot for a while. Afterwards, I used the slippers arranged by one of the ponywallahs. The terrain was plain near Garbyang. Most part of the Garbyang village had given way to land slide. After reaching Garbyang, Ganesh helped me to buy a pair of canvas shoes for Rs 120/- from a lady. 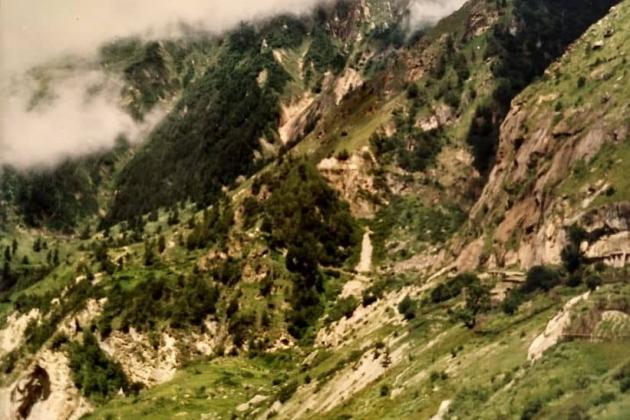 Before reaching Gunji, Ganesh showed us the confluence of Kali Ganga and Swet Ganga informing us that Adi Kailash trekking route follows Swet Ganga. Our route was along the Kali Ganga River.

We reached Gunji camp around 3.00 P.M. Before reaching the campsite, we could see the Gunji village down below.

Gunji camp had six different areas. Four huts at the same level and two big houses, one at the upper level and one at the lower level, belonged to ITBP personnel. Two mid-level huts, separate for men and women, were given to the pilgrims. One hut was the kitchen.

Gunji campsite was extremely windy. After we finished our lunch, we came out of our room to view the mountains around us. We could see the mountains with snow peaks and the Gunji village in the foothills.

Since the commencement of our trekking from Tawaghat, each day we experienced a different kind of scenic beauty. Way to Pangu was mostly barren, Pangu to Sirkha was green with terrace cultivation, Sirkha to Gala via Rungling top had all shades of green, water streams and waterfalls - each frame was like a picture postcard.

Gala to Malpa had the gushing Kali river washing over the big boulders (we imagined them as Lord Shiva) and many waterfalls including the two-step Najang falls, riot of flowers at Chhiyalekh pass from Malpa to Budhi and very windy Gunji. We could see the snow peaks also from Gunji. It was shown to us as the Annapurna peak.